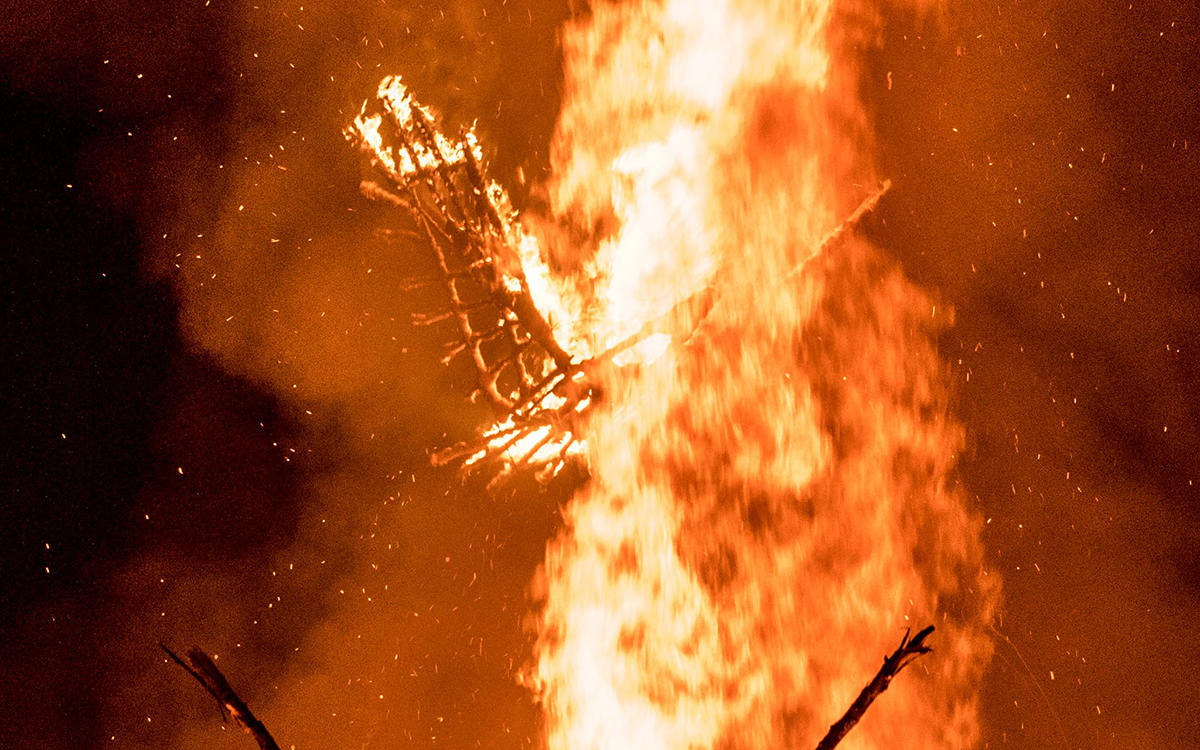 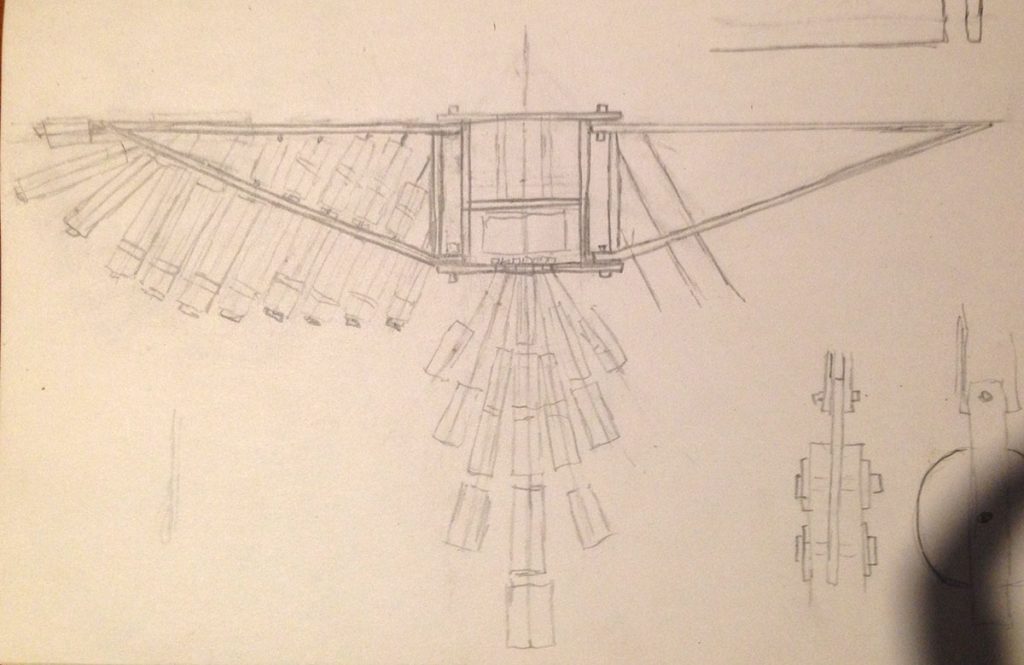 First concept drawing. Was planning on using flat steel which evolved to tube for strength. The idea was to use the techniques of fire twirling , so we are making a large, moving poi. Rather than using expensive kevlar, used jute webbing as we are only burning this once.

The myth has been done many times by artists through the ages and more recently as burning art. I wanted to make a phoenix fly. Such a strong icon is not just going to sit around while being incinerated right? 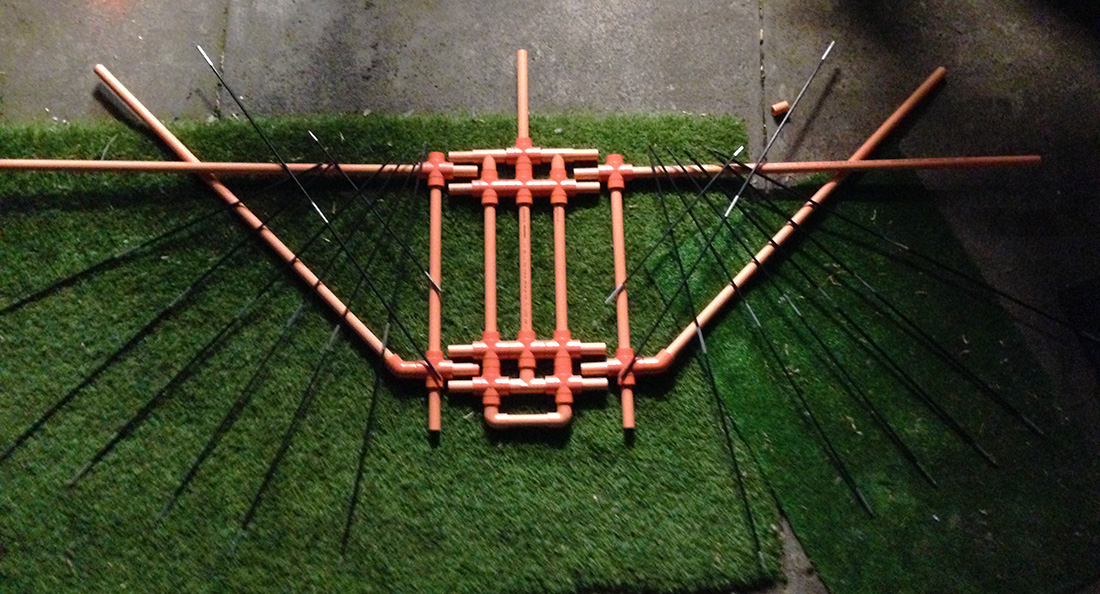 Not quite finished version 1. I started with “a little bit of plastic”. As you can see, this is a lot of plastic. I was tripping with this direction and scrapped it.

I predicted this should worked better than the steel one as it would flexed and added more life to the puppet. It would also been destroyed in the fire. Made from fire sprinkler CPVC pipe with fibreglass tent poles. Bound (not completed) by tape. 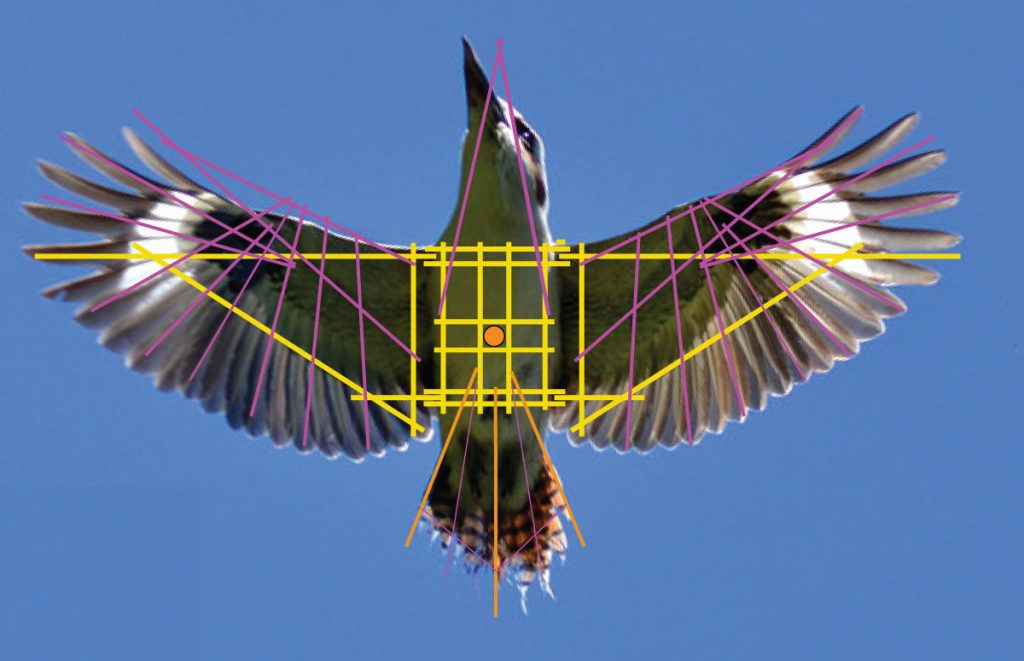 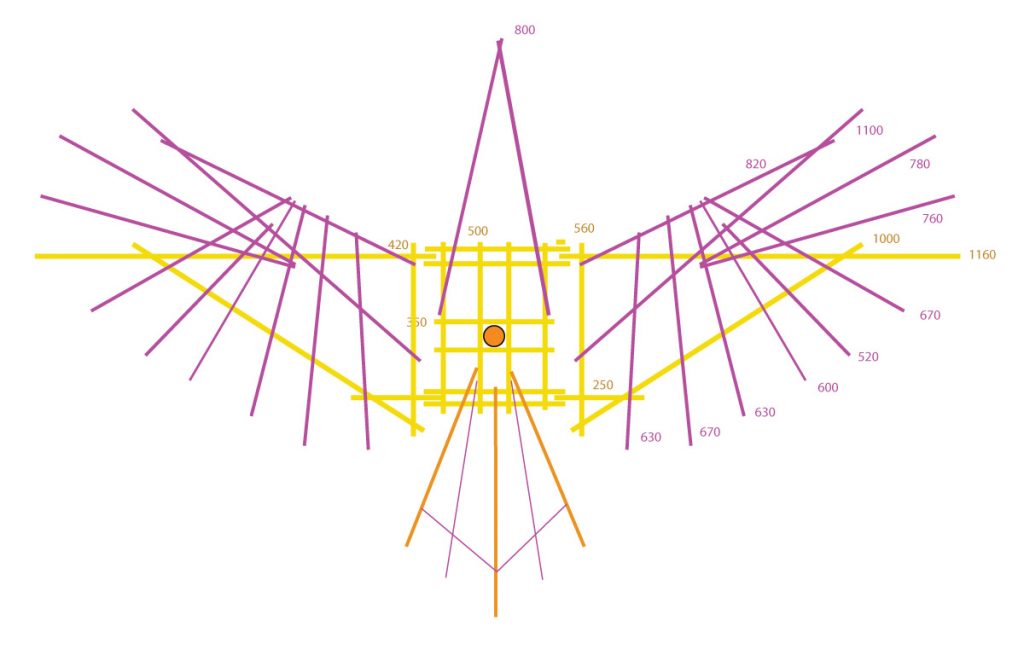 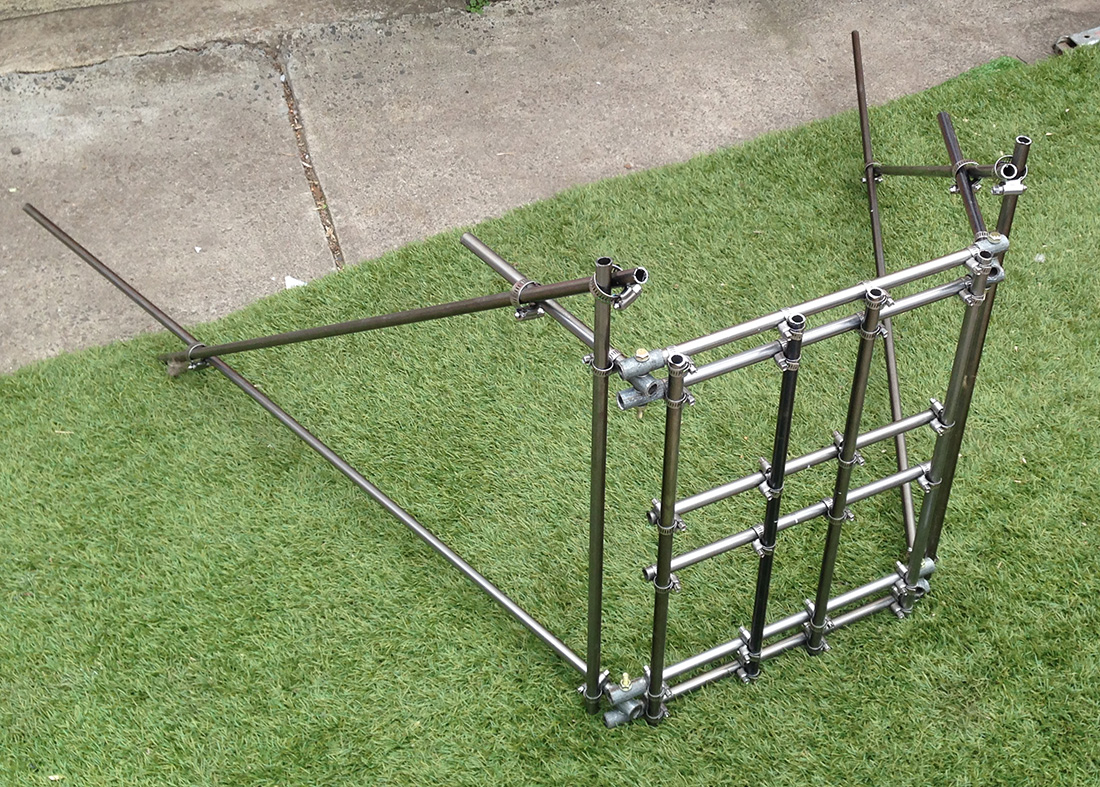 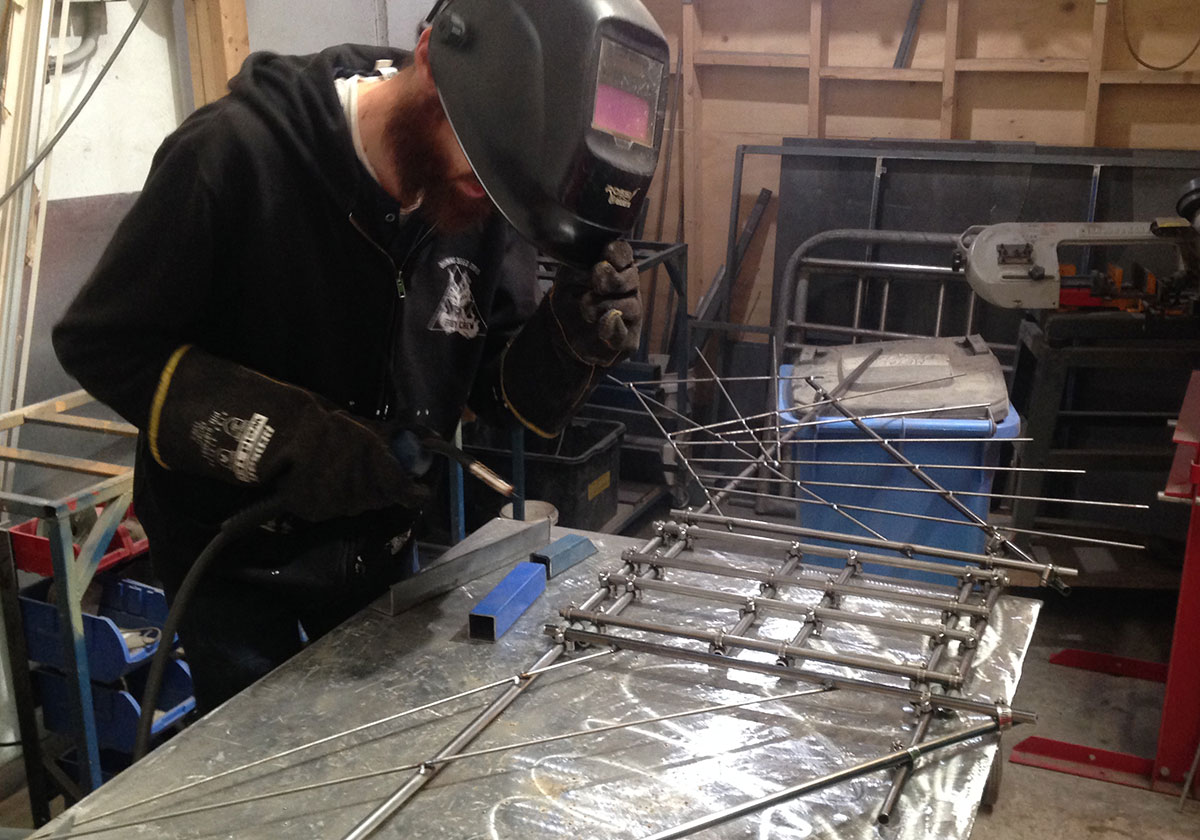 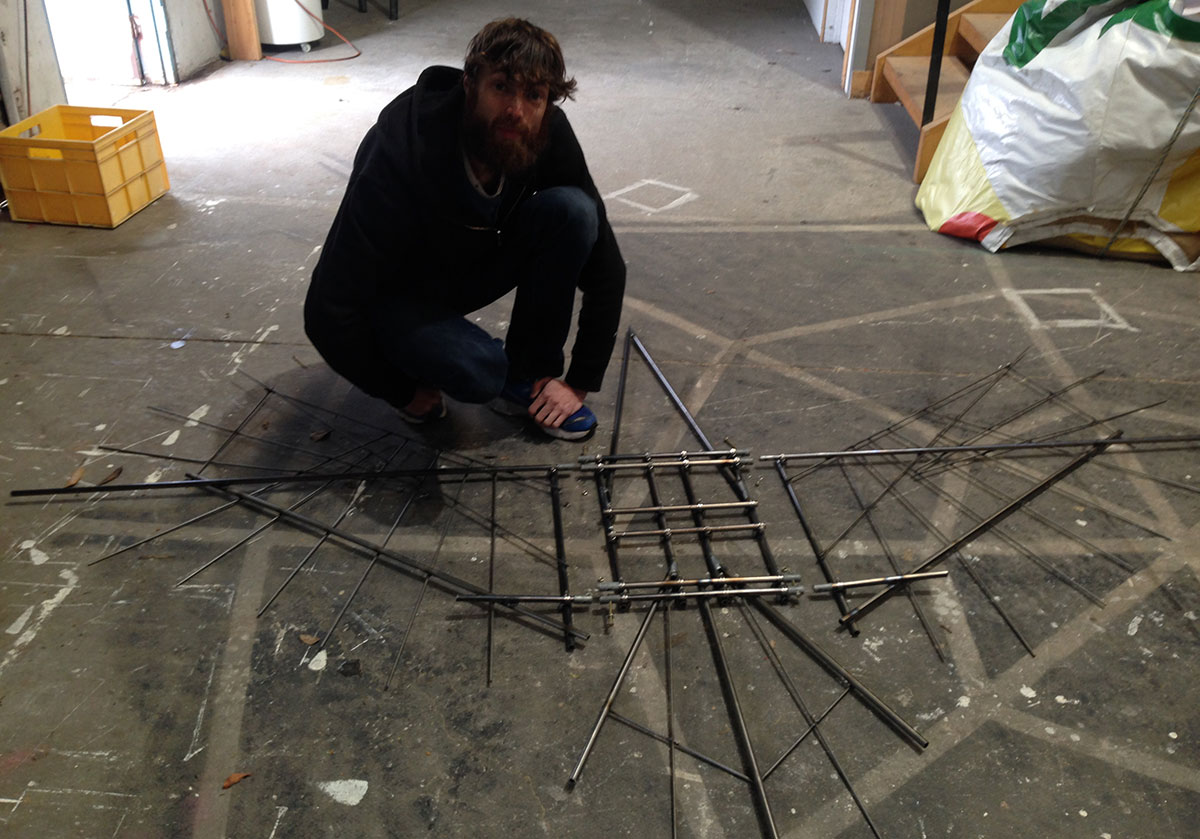 The wing feathers, head and tail were welded by Rohan at Norm Warehouse. We also added the verticle pipe pictured in image

Puppet with attached. On each side is a custom made stainless steel spring as well a standard steel one from shop. I predicted the springs to be the fail point and a risk that they would fail completely. Also pictured is the start of the wax accelerant layer. Photo by Jazzy Fizz. 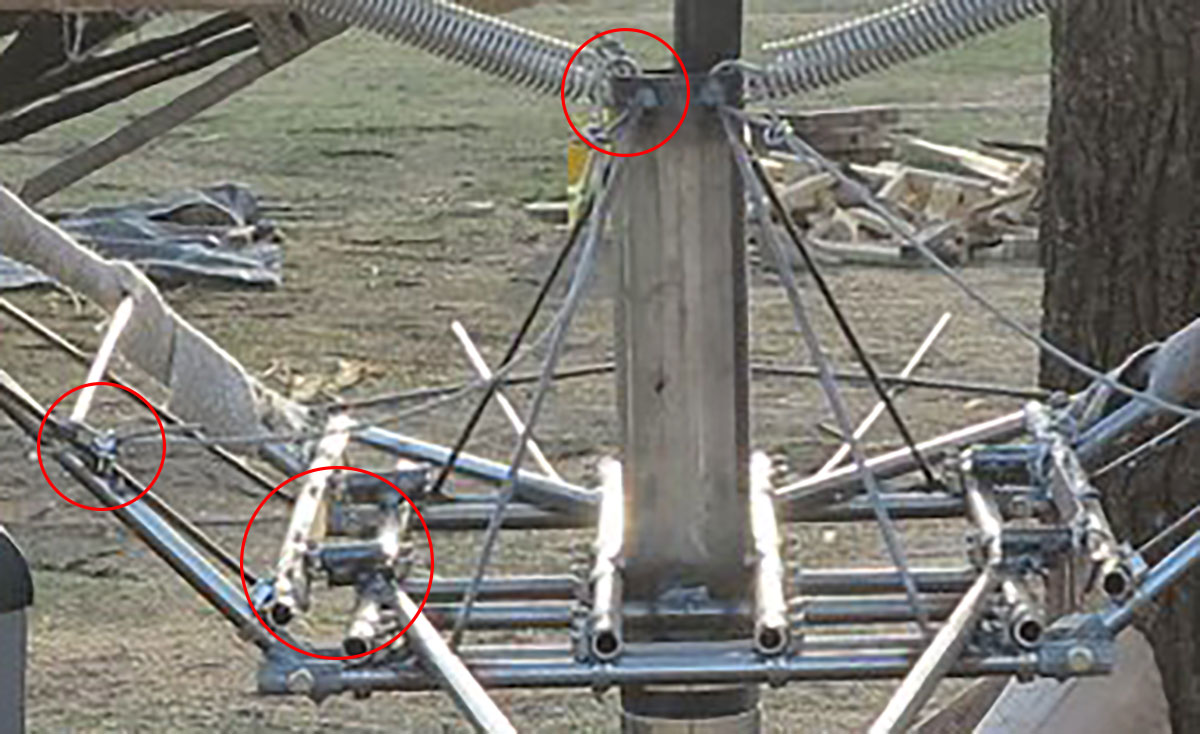 Detail showing the spring attachments at the top. Springs fail when stretched too far so I attached a cable (top + left) to stop the spring . Not shown are the cables that pull the wings down. They out on the wing to increase the angle of the cable.

If the wings went too high, the angles prevented the downwards pull so we made two stops pictured in circle. You can see the curve on the bar, where the springs are too strong for the material so we also re-enforced this bar. We got wrong, so used another hose clamp to space it perfectly. I predicted a risk that this bar may fail, the structure held perfectly with the springs the only fail point of the bird. Secondary welding by Brian. 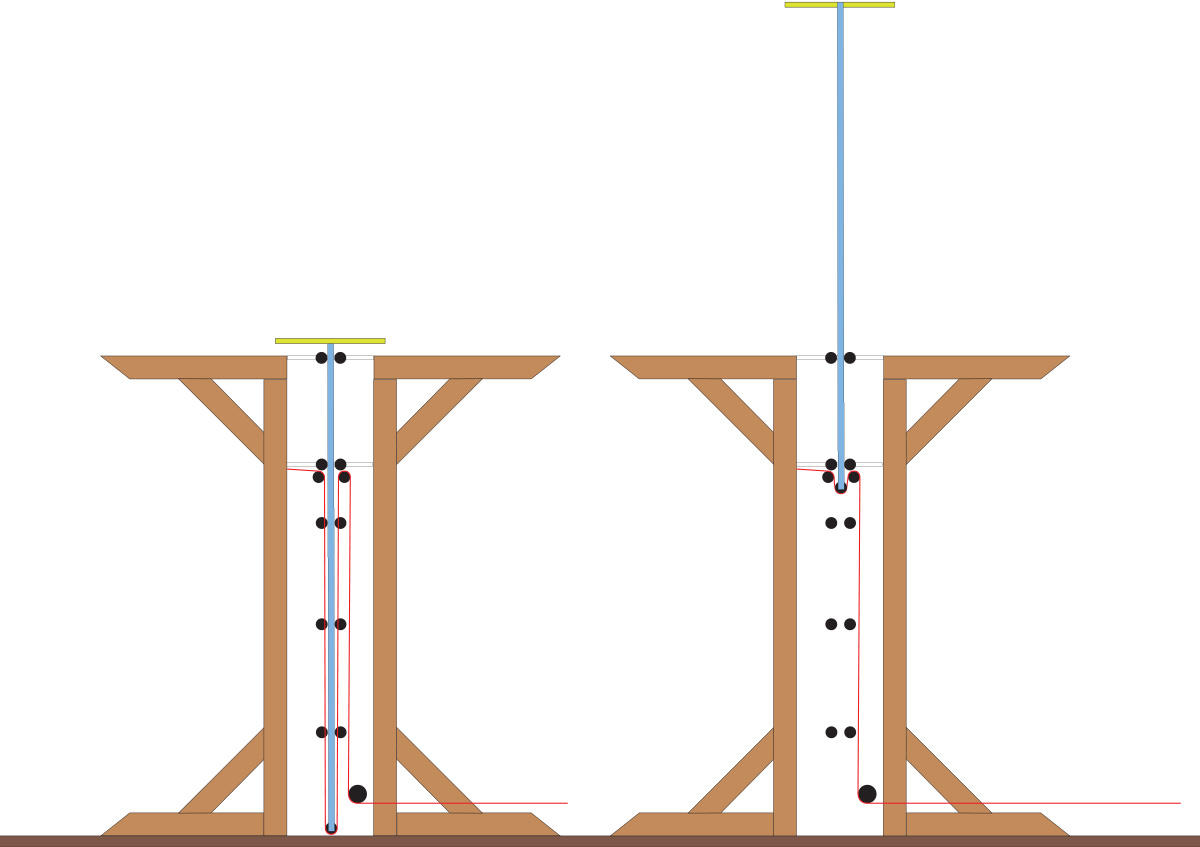 Video explaining the lift mechanism for the puppet. The anchor point for the downward motion of the wings was re-enforced and better secured than was pictured in this video. 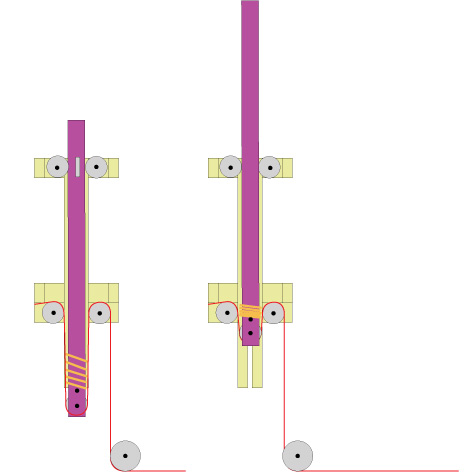 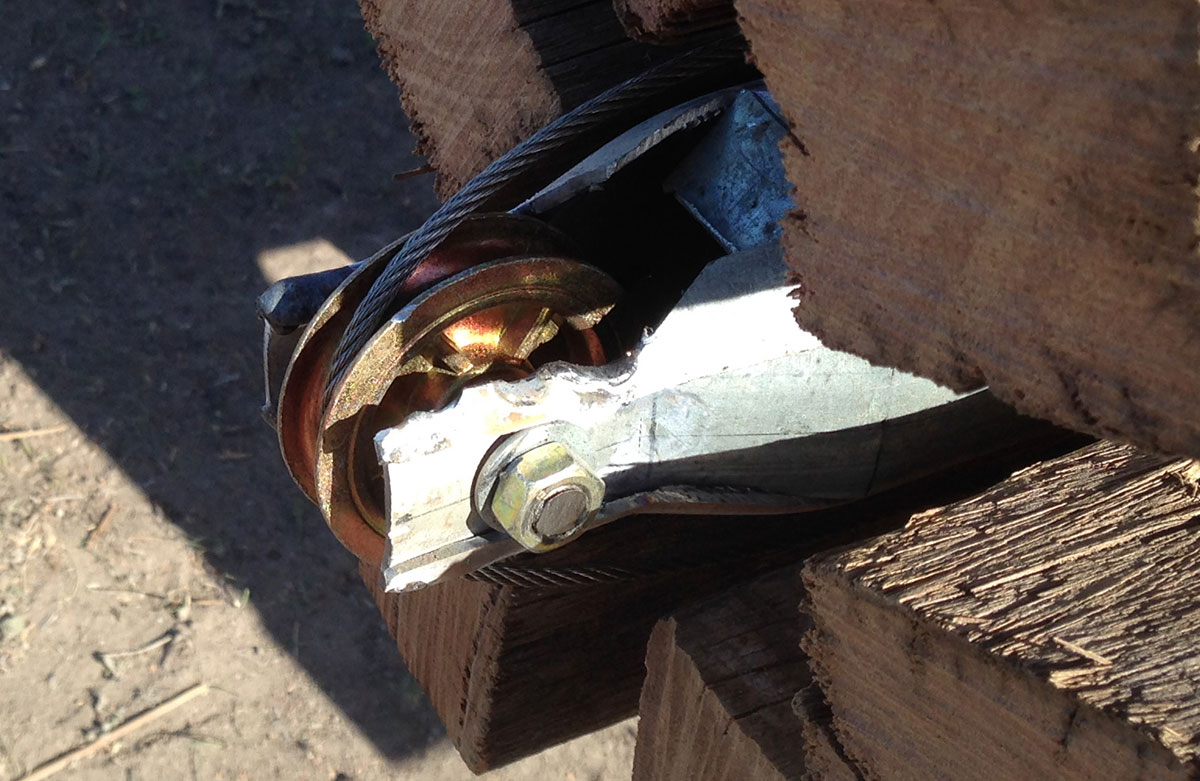 Lift pully at the bottom of the pole (missing from video) 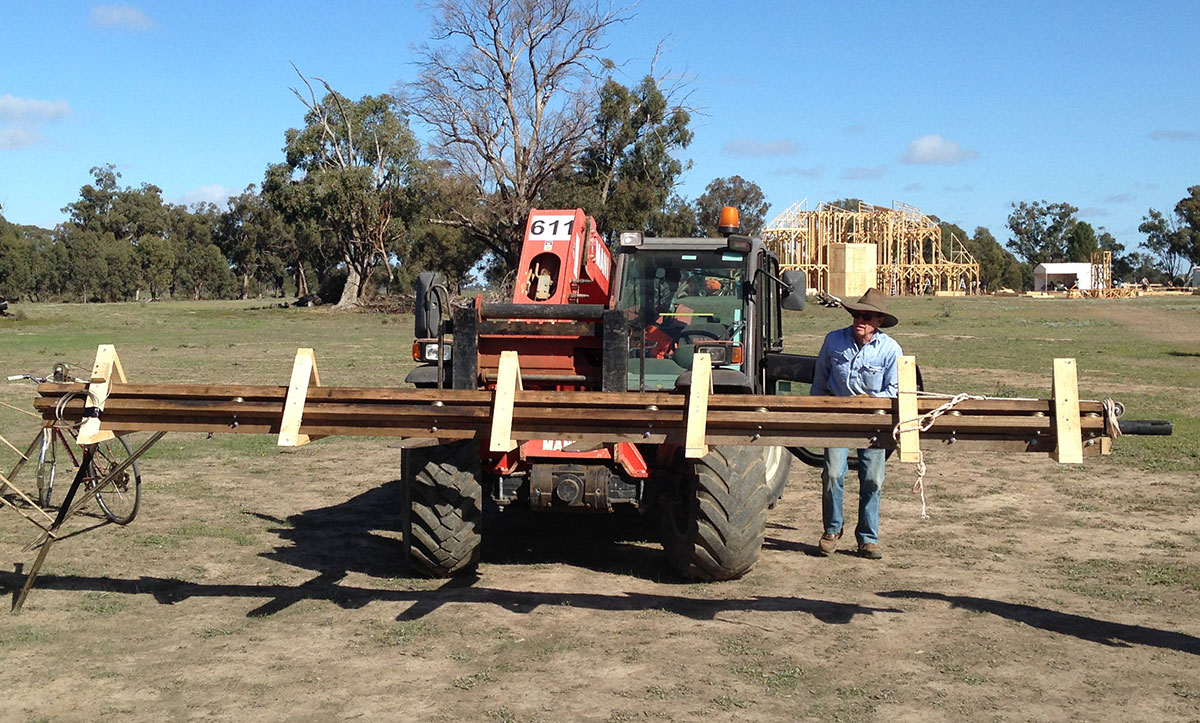 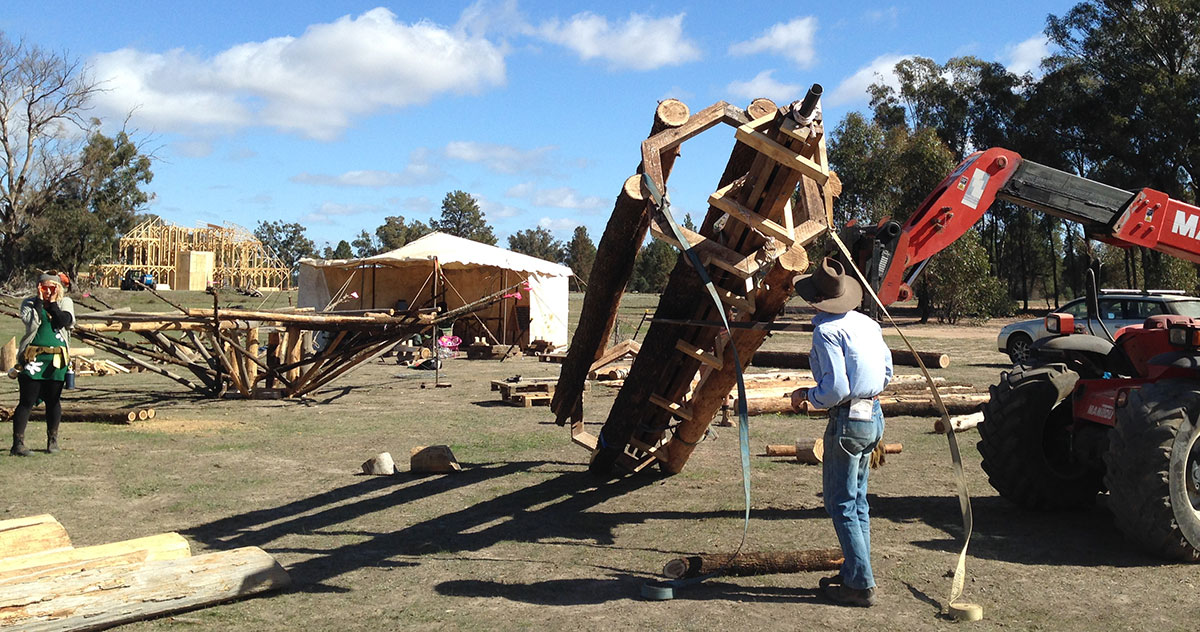 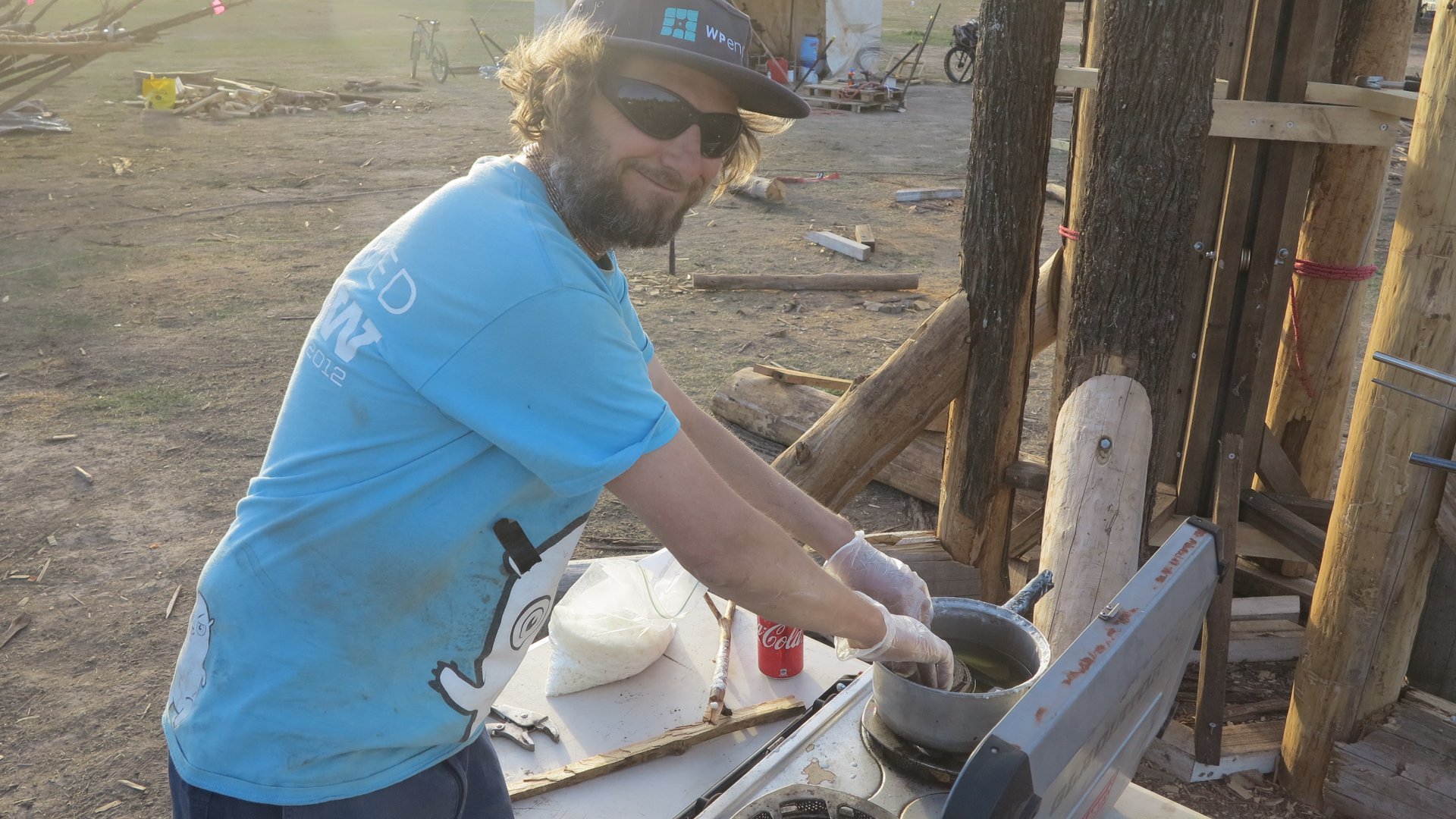 The accelerant cladding was done in two layers. The first using molten soy wax bound in jute strapping, secured with thin tie wire. The second layer was raw jute strapping as we planned to add gum turpentine while dousing. We could not add the gum turpentine (see below) so only the soy wax provided the flames. Photo by Jazzy Fizz 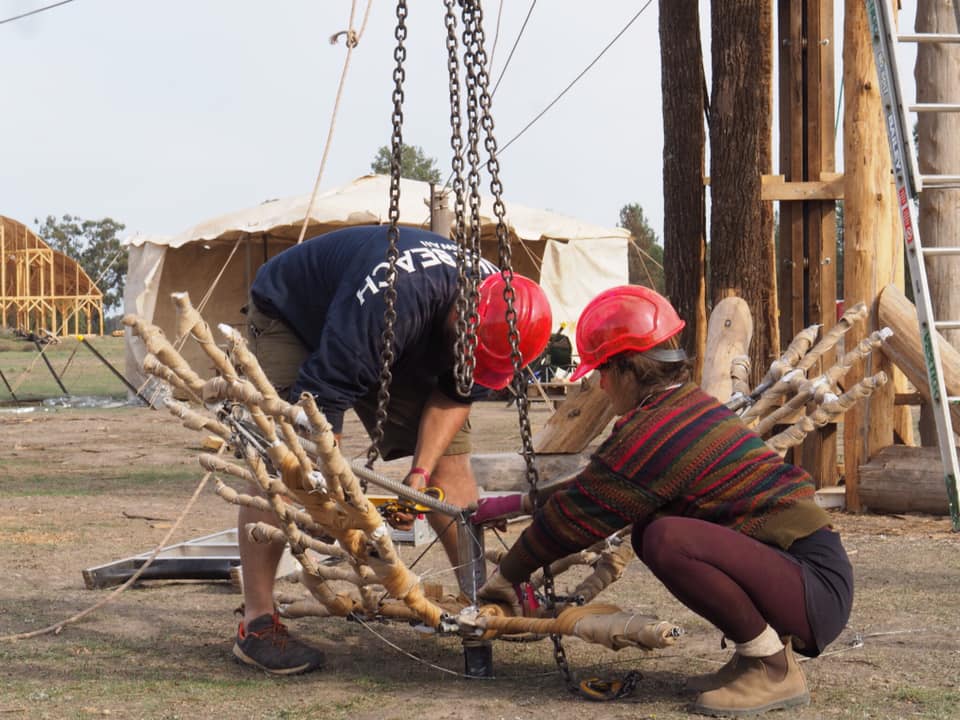 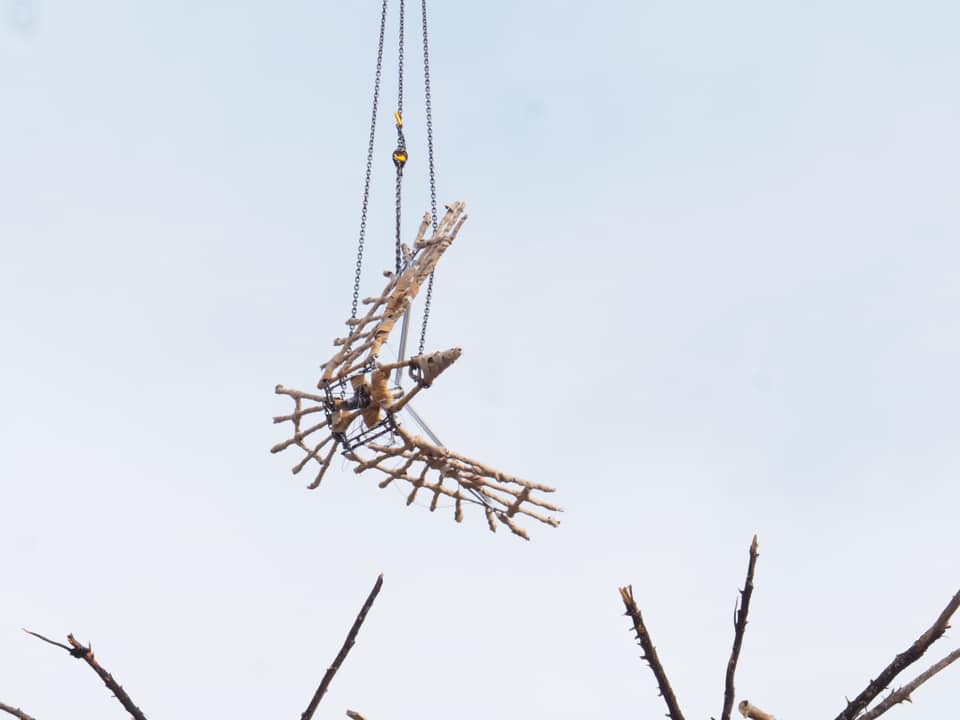 Lifting the puppet with a crane.  Probably the lightest thing he lifted. Once in place, the puppet was secured with a pipe and hose clamps. We attempted to hide the puppet as much as possible while stacking timber into the structure so the burners would not know about this part. We like surprises. Photos by Gonzalo Collazo. 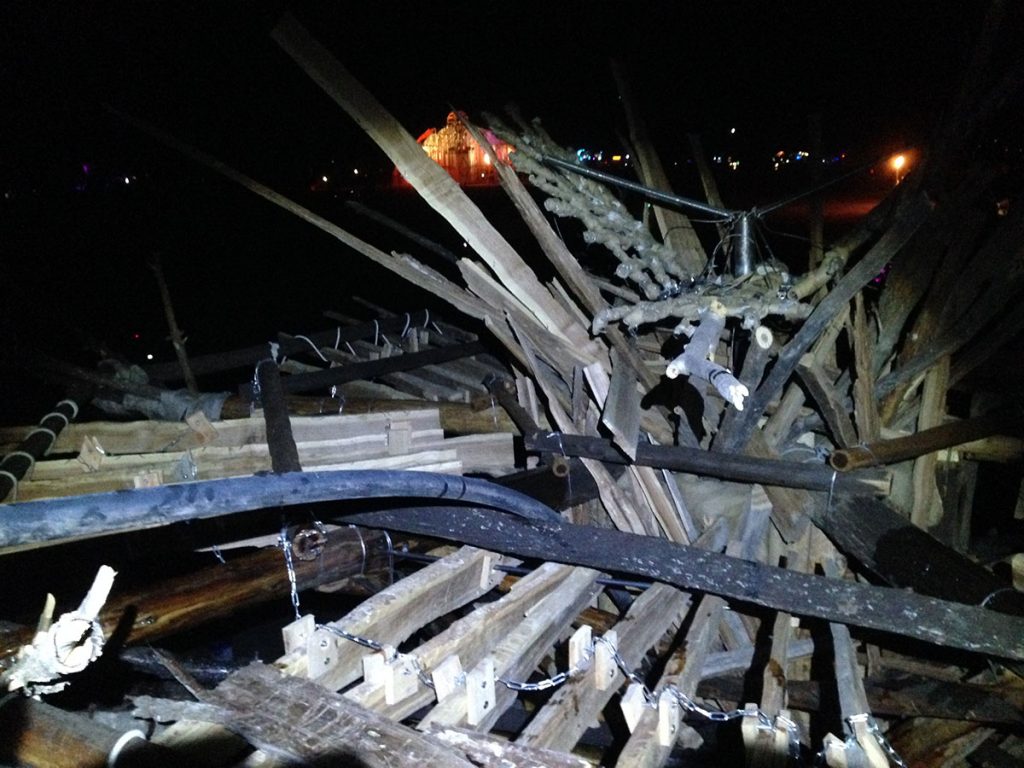 The view from the top of the scaffolding while we are loading 80 litres of used oil sourced from the Grongi pub. We attempted to douse the puppets second layer of webbing with gum turpentine. This was not working and could not be done safely so we abandoned the plan. The first layer of soy wax burnt well anyway.

This is the only video that captured the puppet.

00:00 – Tiffany and myself pull the rope that is attached to the steel cable mechanism to pull up the puppet.
00:02 – Puppet reaches . Wings have not pulled down.
00:05 – I assume the downward wing mechanism has failed. After reviewing the video, the puppet has not reached full height. Probably some wood has jammed somewhere. Likely stopping the bolt we used to stop the puppet twisting. During this time realised the lubrication from 80 litres of chip oil has made the puppet feel a lot lighter for one person to handle. I ask my partner to drop her rope.
00:07 – I get the feeling of the mechanism and puppet weight.
00:09 – I start jerking the puppet as hard as I can to get the springs to recreate the pull effects.
00:10 – This works. I keep jerking. (insert dodgy joke here)
00:18 – The wing springs fail.
00:26 – I drop the puppet. 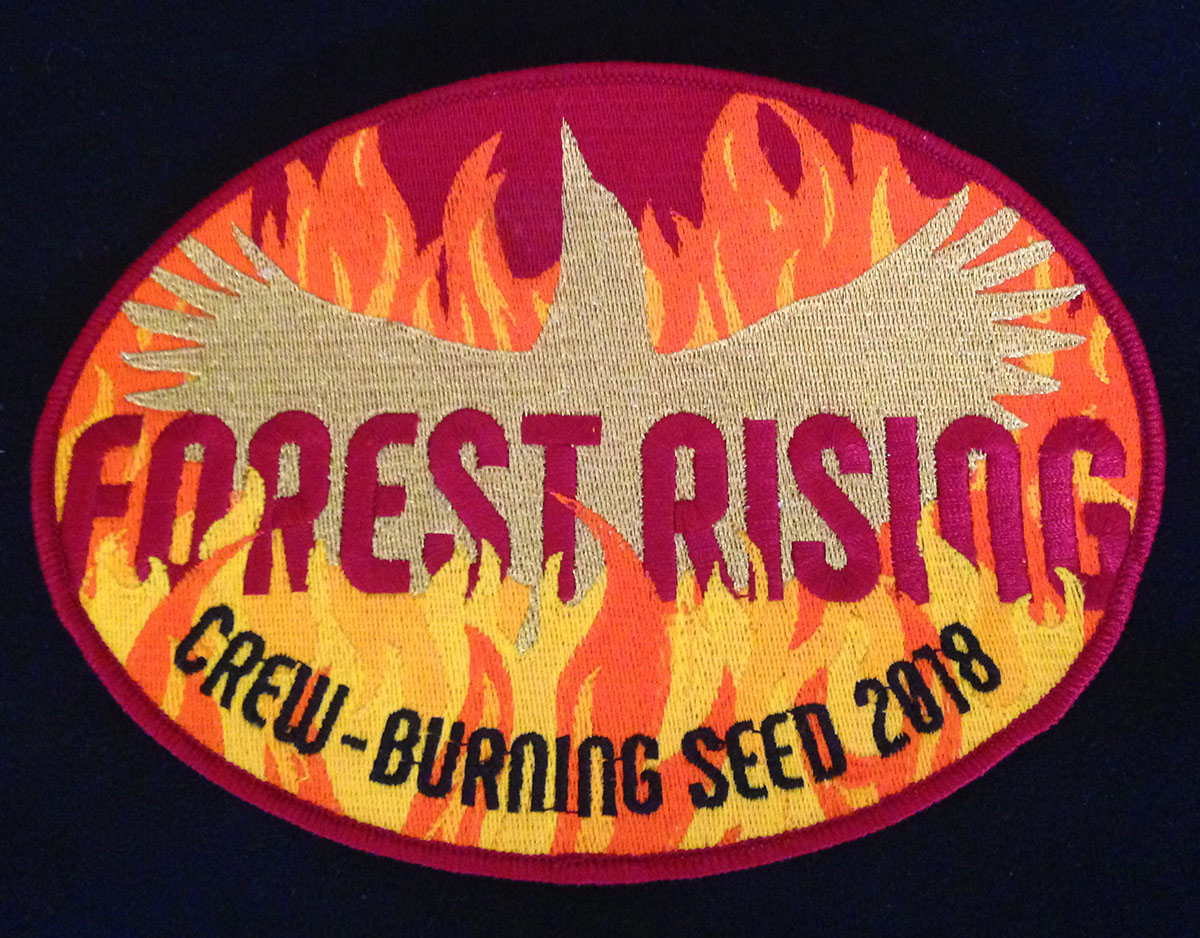 Returning for their fifth year burning artwork at Seed, FlameWriter and the Crew of talented collaborators are building their most ambitious piece yet. Mixing puppetry with animation with accelerants with a blazing bonfire, we will be having a crazy Friday night.

Collaborating with Red Earth Ecology in the lead up, we will be exploring the beautiful, ancient world of wonder that is our home at Matong State Forest.

Have a stroll through the forest, The ancient spirit of the forest lives strong through the connection and the many diverse species that inhabit Matong State Forest. You will also find many stumps of felled trees. You would think that's from the old days, however Matong's sister forests are being logged to build houses and structures for us to burn. Is this really leaving no trace?

There are many standing dead and fallen trees that, added with climate change increase the intensity of bushfire beyond their natural limits. Traditionally this fuel load would have been reduced by the local Wiradjuri people who used fire to manage these forests.

There are many sources of timber waste such as local logging waste, salvage timber and large volumes of disposable wooden packaging such as pallets from surrounding cities. Forest Rising will use no timber from native sources, no plywood or other toxic composites and use minimal farmed timber. We will also use no petrochemical accellorants.

Rising from the ashes is a consciousness and connection to land that is inspiring people to rise and protect the many special and sacred lands across the country.

We are prototyping an alternative. As a community are we ready to adapt?